Mirror game is an improvisation exercise for two people, where one person moves and the other acts as their mirror. In the game, the roles of leader and follower can be switched, and eventually the roles can be abolished, and the pair shares leadership, both mutually mirroring each other.  The mirror game has been adapted to scientific research, where the game has been simplified to a 1D version with buttons on sliders [3], and a 2D version where participants move their hands as if drawing in the air [1]. In these studies, the condition of joint leadership has been found to produce movements that are better synchronised and smoother than those in the leader-follower conditions.

We extended this game to four people, and are investigating it as a) a method for studying group dynamics in movement coordination, and b) a measure of intersubjective attunement.

We used a 20-camera optical motion capture system to record four-player games. For the capture, each participant had 12 reflective markers attached to their upper limb joints, chest, head, and index fingers. In the pilot stage, we had four participants (2 female), all experienced in dance and improvisation. They played two games, and in between, engaged in another type of group improvisation. During the games, participants stood in a circle, with their right arm and index finger extended towards the centre. Participants were instructed to mirror each others’ hand movements, without an assigned leader.

Comparing the QoM’s of the two games, the first game produced a less correlated performance (Figure 1), and the cross-correlations indicate that overall, no pairs emerge as very well coordinated (Figure 2). Looking at the QoM's, there is clearly coordination, but it is quite noisy. There are times when people are not sure how to follow everyone else, and there are some cases where one participant moves but others don't seem to respond (e.g. A, (blue trace) at 1200–1400 samples). The four-player game poses difficulties, as there are many options for how to mirror others' movements: whether to do the same as others, mirror the player in front, or for example minimise the distance between the fingers? The rules left this ambiguous and for the players to figure out. 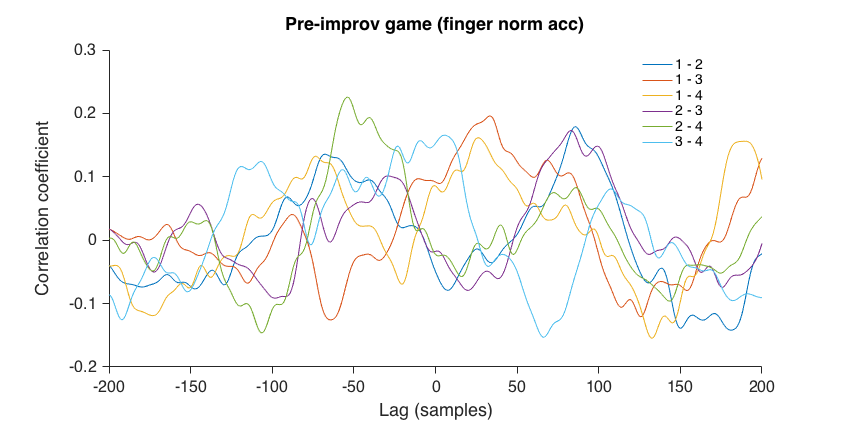 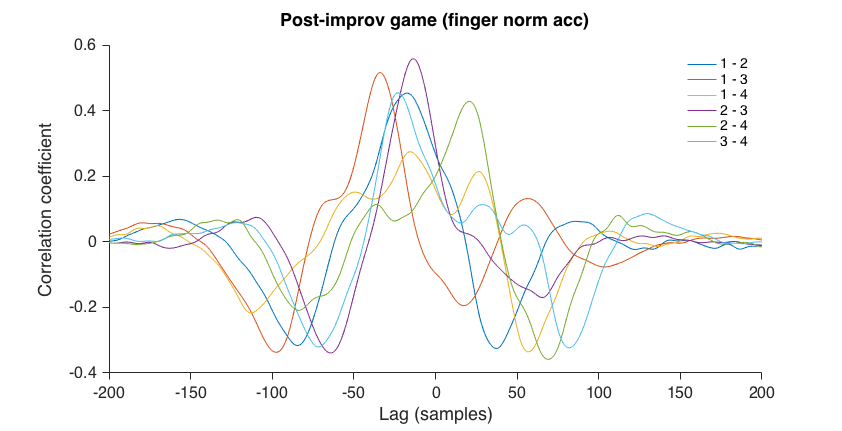 Our pilot study suggests that the four-person game produces phenomena that are interesting from group dynamics point of view, for example the emergence of subgroups [4]. The task gives rise to ”conflicts” where a performer must quickly decide which of the three other players to match, which leads to a mis-match with the other players. Prior research indicates that synchronisation and coordination lead to positive affective and social outcomes [2, 5], the four-way game offers a potential to study these effects and mechanisms in more detail.