The feasibility study of the satellite have been made by Aalto University students during the spring semester 2010. The main requirement for the satellite was a realistic implementation of an innovative Finnish space instrument. The goal was achieved. Several excellent instruments were found and most of them are included in the proposed satellite. The Preliminary Design was finished in the end of 2011 and currently the team works towards Critical Design Review in next year. 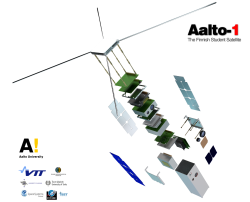