In processing speech and audio, we often need to split the signal into segments or windows, because

In practical scenarios, we thus always apply windowing before processing.

Applying spectral processing, such as processing in the STFT domain, in telecommunications applications however has a significant drawback. We need windows which are overlapping to allow perfect reconstruction, that is, we require that we can perfectly reconstruct the original signal from the windowed signal. Overlaps however mean that consecutive windows share information from the same samples (see Figure on the right). The same information thus has to be encoded in both windows, which is inefficient. With coding a signal, our target is to compress the information to the fewest possible bits, but if we encode a part of the information twice, we increase the amount of information we need to encode. The STFT domain thus causes over-coding, where in effect, two different bit-streams could represent the same output signal.

The modified discrete cosine transform (MDCT) is a solution to the over-coding problem, which uses projection-operators at the overlaps such that the information in consecutive windows are orthogonal to each other. Since information is therefore perfectly retained, the amount of information is not increased nor decreased, and we say that this operator is critically sampled.

The MDCT thus provides a time-frequency representation of the input signal, where we can analyse and process the time-evolution of frequency-components. It shares most of the beneficial properties of the STFT, wherein a signal processed in the MDCT-domain, remains continuous in the time-domain and we can use FFT-based operations for efficient implementations. Perhaps the most significant difference between the STFT and MDCT, other than perfect sampling of the MDCT, is that where the STFT is a complex-valued representation, the MDCT is a real-valued representation when the input is real-valued.

Due to these beneficial properties of the MDCT, it is the most commonly used time-frequency transform in speech and audio coding and employed in standardized codecs such as MPEG USAC, 3GPP EVS and Bluetooth LC3. 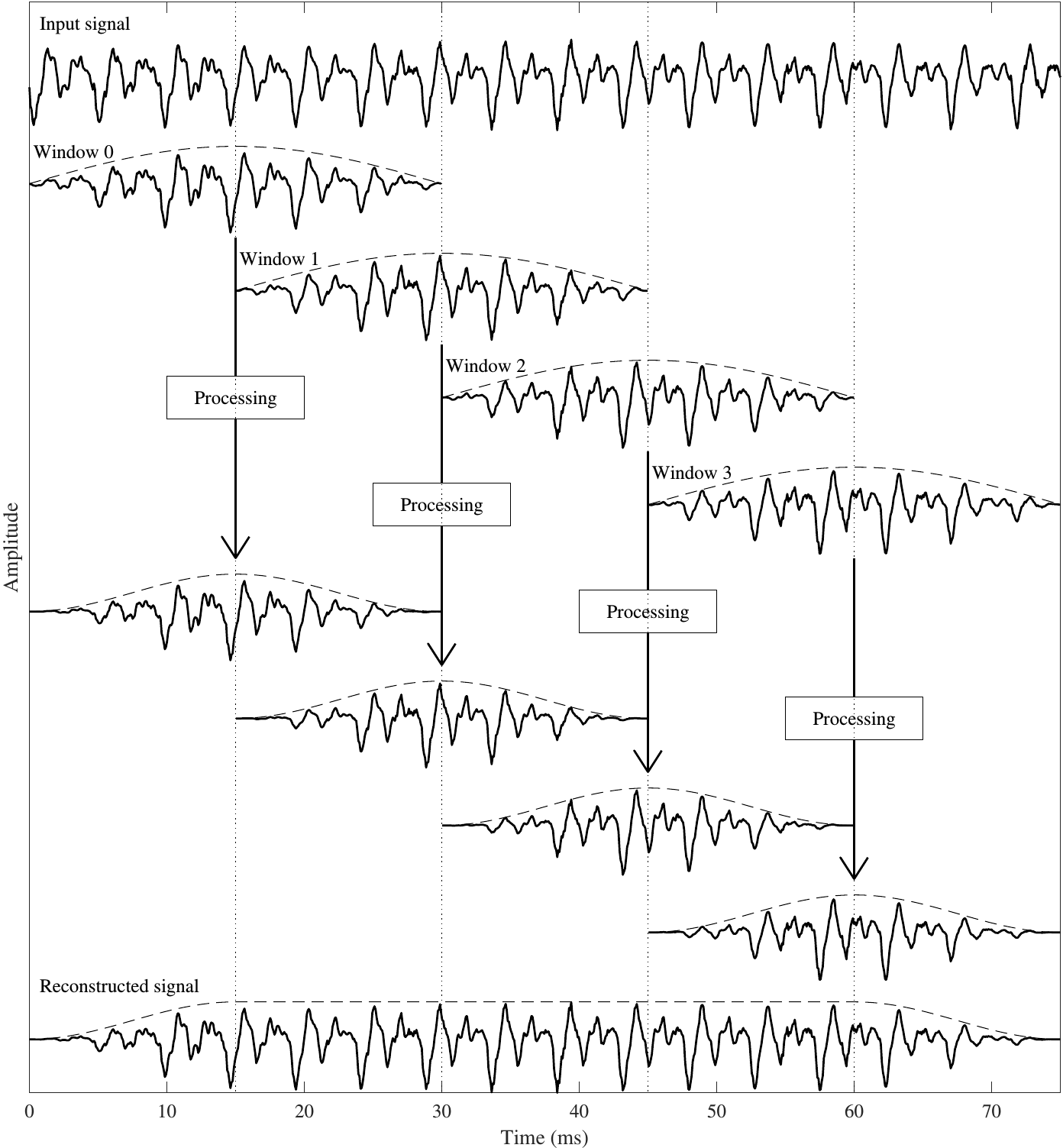 Secondly, we take the discrete cosine transform (DCT) of the windowed signal (=of the orthogonal projection). The conventional DCT has to, however, be adjusted such that its phase and symmetries match with the symmetric and anti-symmetric parts. Hence the name modified DCT or MDCT. The matching of symmetries is possible only through this modification of the DCT and cannot be generalized to the discrete Fourier transform (DFT).

The (anti)symmetric part of signal then "looks like the signal" which would have this symmetry. In other words, we introduce a deviation from the original signal and this deviation is known as a time-domain aliasing component, since it is similar to the aliasing effects which occur with the DFT. However, in reconstruction, we add the symmetric and anti-symmetric parts together, such that they cancel each other, which is known as time-domain aliasing cancellation (TDAC). The TDAC is equivalent with the orthogonal projection laying at the basis of the MDCT, and thus a central property of the MDCT.

Suppose x is a Nx1 vector representing the overlapping region shared by two consecutive windows, such as the are between 15 and 30 ms in the figure above and right. Our task is to design a projection matrix P of size NxN, such that we can split x into two orthogonal parts as

The vectors xL and xR, corresponding to the left and right windows, are thus both of length N/2 and contain each exactly half the information of x.

where the P0' is the kernel of P', and JWJ is simply the backwards part of the window (if W is the increasing left part of the window, then JWJ is the decreasing right part of the window). Note that the relationship between the two kernels, \( P_0'=P_0JWJ \) applies only to the symmetric operator defined above, but generally not. In any case, the above definition now includes windowing and the orthonormal projection such that the beneficial properties of perfect reconstruction and critical sampling are retained, but now the signal is also going smoothly to zero at the edges, because we applied a windowing function.

Our objective is to find a spectral representation of the windowed input signal. Importantly, note that above we studied the properties at the overlap, where we took an orthonormal projection of the overlap to obtain the left-part of the current window xL and right-part of the preceeding window xR. To avoid confusion, we here have to include the frame indices, such that the overlapping parts are now, respectively, xL,k and xR,k-1. The spectral representation, however, should come from a single frame, that is, we define frame k as

In principle, the transform matrix D could be any time-frequency transform (DFT, DCT-I, DCT-II, DST-I etc.), but we need to choose one specific. To evaluate the sanity of a particular choice, we should check how well the transform works together with the prior orthogonal projections. In particular, let us substitute the defitions of the left and right parts into the above equation to obtain

The combined windowing+projection+spectral transform is thus   \( y_k=D\hat P \begin{bmatrix}x_k \\ x_{k+1} \end{bmatrix} = M \begin{bmatrix}x_k \\ x_{k+1} \end{bmatrix}. \) To evaluate the sanity of a particular time-frequency transform, we thus have to study the basis functions of matrix M. By exhaustively going through different options, it is simple to see that the implicit even/odd extensions of DCTs align with the symmetric/antisymmetric projections only for DCT-III. For the other options, we always get discontinuities in the basis functions.

Heuristically speaking, we want the basis functions to "look like" plausible signals, which could appear in a naturally appearing physical system. More formally, such "nice looking" basis functions have less leakage between spectral bins, and thus offer a more accurate description of the spectral characteristics of the input signal.