The purpose of his task is a test of group entrainment. There are two different groups, and the aim is to maximise entrainment and tempo stability within groups, while minimising entrainment and influence between groups.

Participants are divided into two groups. In each group, a group leader has a metronome. The two metronomes are set to different (non-harmonic) tempi, e.g. 85 and 100 BPM. The game has three stages.

Each stage could take 1-5 minutes.

Here we demonstrate some of the analyses that can be useful in analysing group synchrony. These results are from just one performance, to give a taste of the type of data that the game produces. In this game, there were 10 participants that had five accelerometers each; on their left and right wrists and ankles, and on their chests. These ten participants were divided into two teams. In addition to the "captured" participants, there were two other participants. in each team. 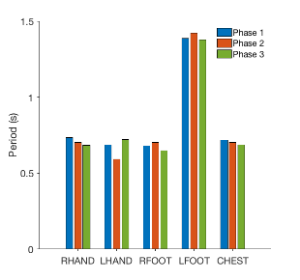 Using the autocorrelation method to estimate periodicities, we see that different limbs move in slightly different tempi. Figure 4 shows the average periodicities for the three phases, for the individual participant.