The goal is to create an escape room puzzle box with intuitive educational aspects. The first puzzle would be to input 8 bit values from various numerical systems as binary values. The user would be given for example a hexadecimal value on a display and would input the converted binary value to the device in the form of pressing buttons connected to LEDs. When a LED is on, this resembles a 1 from the binary value. There are 8 LEDs and 8 buttons. When the first stage is completed, a QR-code would be shown on the screen that would give the user the credentials for a wireless network broadcasted by the device. The user is then redirected to a webserver hosted on the device, prompting the user to solve another puzzle. This second puzzle of the puzzle box is deciphering an encrypted message given to the user. The puzzle is decrypted by rotating the box in a specific sequence. The box would be equipped with an accelerometer to sense the orientation of the device.

The original idea of the puzzle box project was to have the user perform various simple educative-themed exercises that would allow the user to proceed to the next challenge. The project was divided into two larger sections:

In this figure, the LEDs are all off, which would mean that the binary value would be 00000000.

After the first puzzle is completed, the user is prompted with either a QR code, that when scanned, redirects the user to a Wi-Fi network and by connecting to it and visiting its website, this second part of the puzzle would be initiated. As the user turns the puzzle box in the correct orientation, the website would update itself and show the encrypted message so far. In the example above, if the user would turn the box in the correct order, the message would appear one character at a time, and reveal the answer:

This part of the puzzle could be elaborated upon, it could be implemented like a question, where the deciphered message is the answer. For example: When was Galileo Galilei born? We know that the answer is 1564, so we cipher it into: s5[5], s1[5], s6[4], s2[5], the parentheses are for the program to know what index to choose from each side and the message given to the user to decipher would be: s5, s1, s6, and s2. 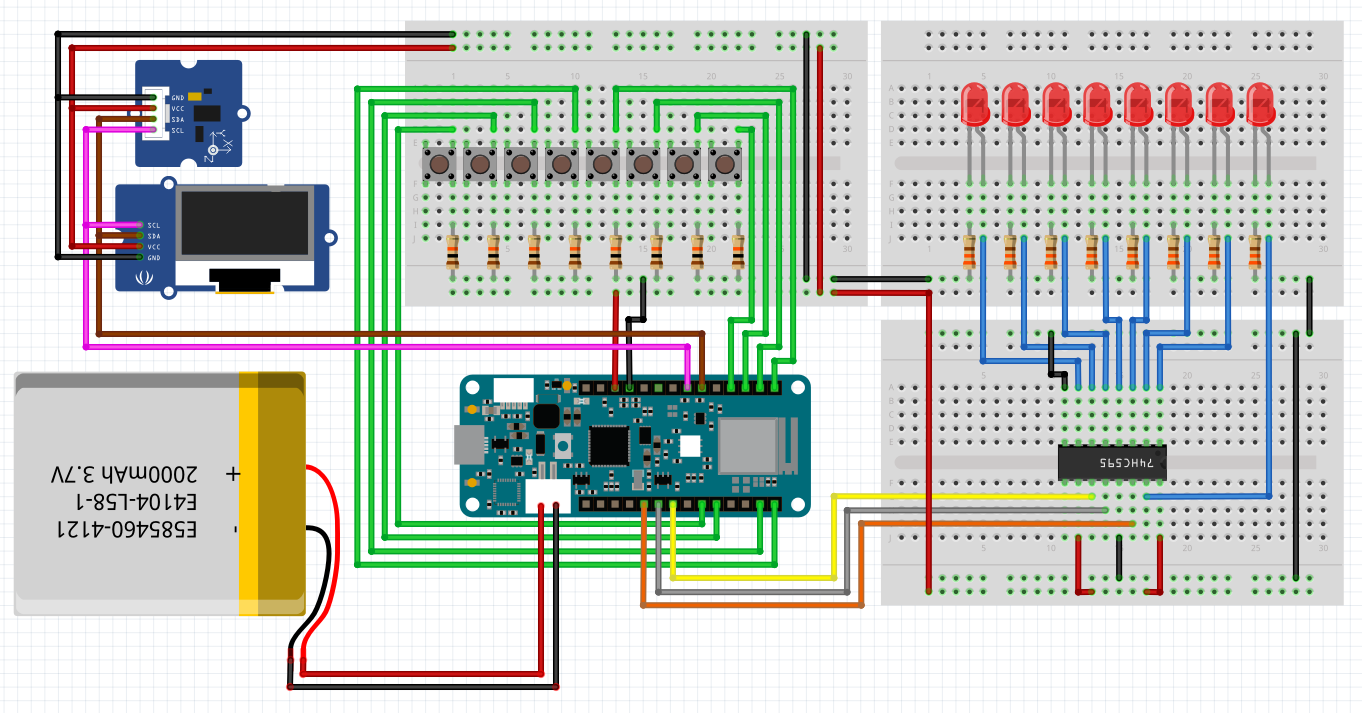 Here is a 3D model for our puzzle box. The box consists of 6 parts (6 sides of a cube). Each side contains a number from 1-6 of which the numbers 1, 4, 5 and 6 will be inset by 2 mm into the surface and the numbers 2 and 3 will be through the surface (this way we make the printing process faster, easier and less vulnerable to errors). Sides with numbers 2 and 3 are identical (apart from the inset number) and they have a support beam, which will work as support for the removable bottom panel (side number 5) . The front side (side with number 1) will have a small gap so that we can fit the bottom panel (side number 5) nicely to the rest of the box. The top of the box (side number 6) has 8 holes for the LEDs and 8 holes for our buttons. Additionally a the top has a hole in the middle for our OLED-screen. The parts will be 3D-printed in our schools facilities. Below is a draft of all the parts and the final box. The dimensions our box is 140 x 140 x 140 mm^3 TÄHÄN TULLOO PIAN PÄIVITETYT KUVAT 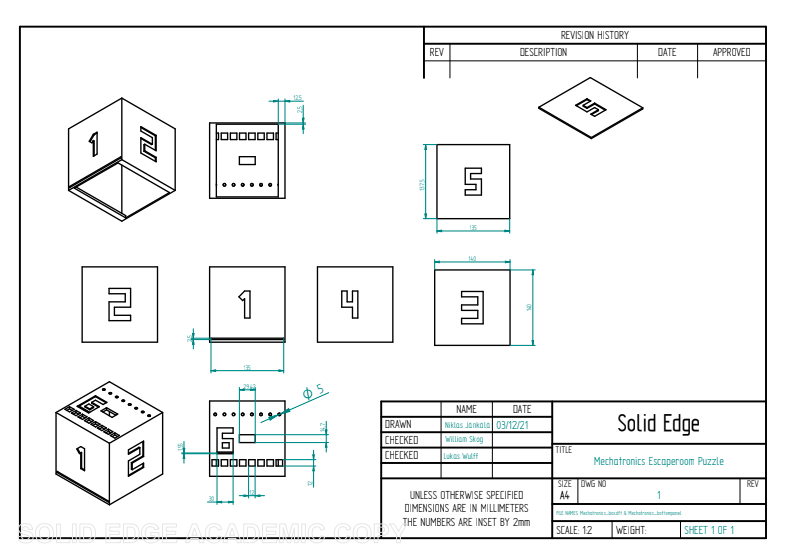 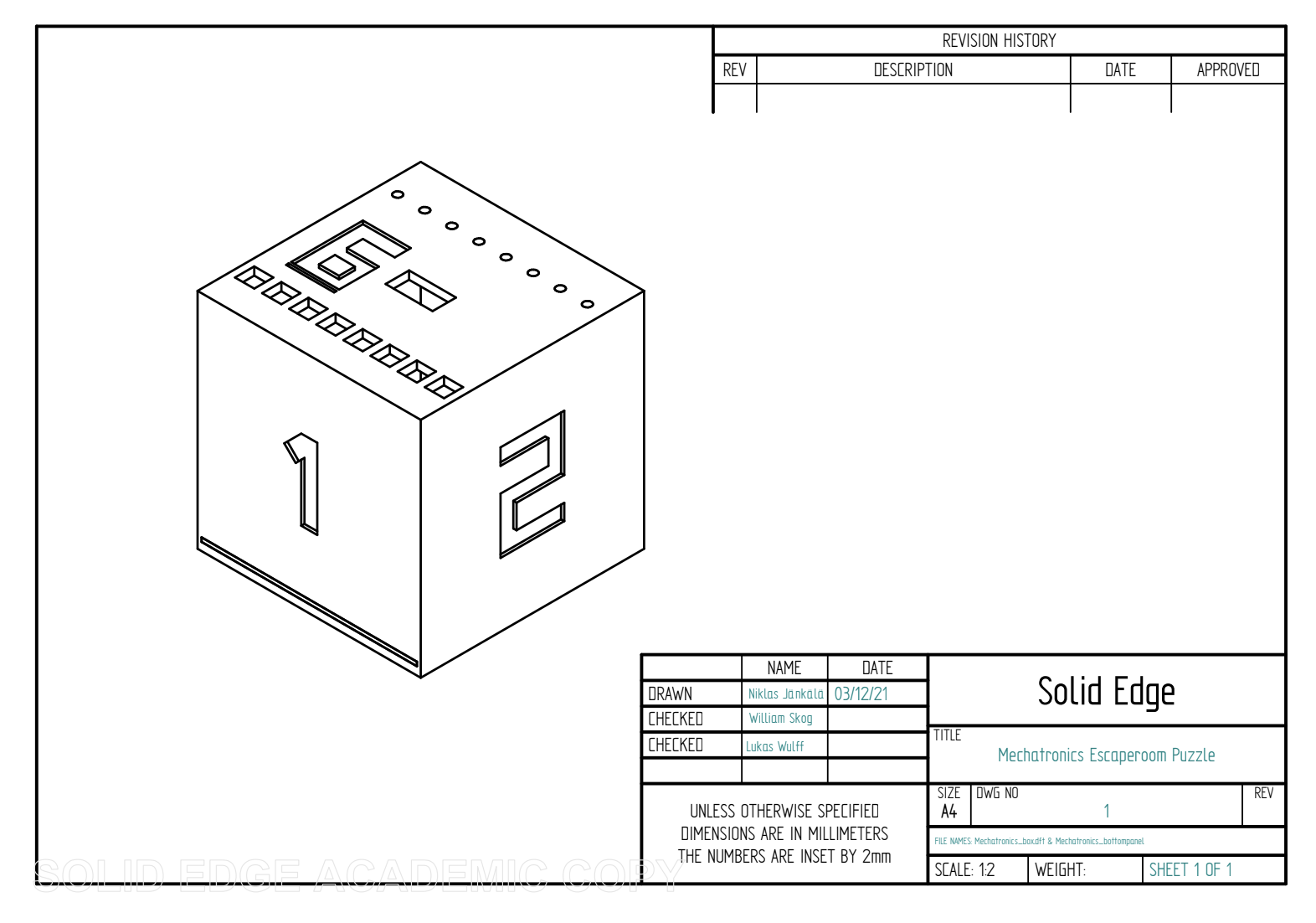 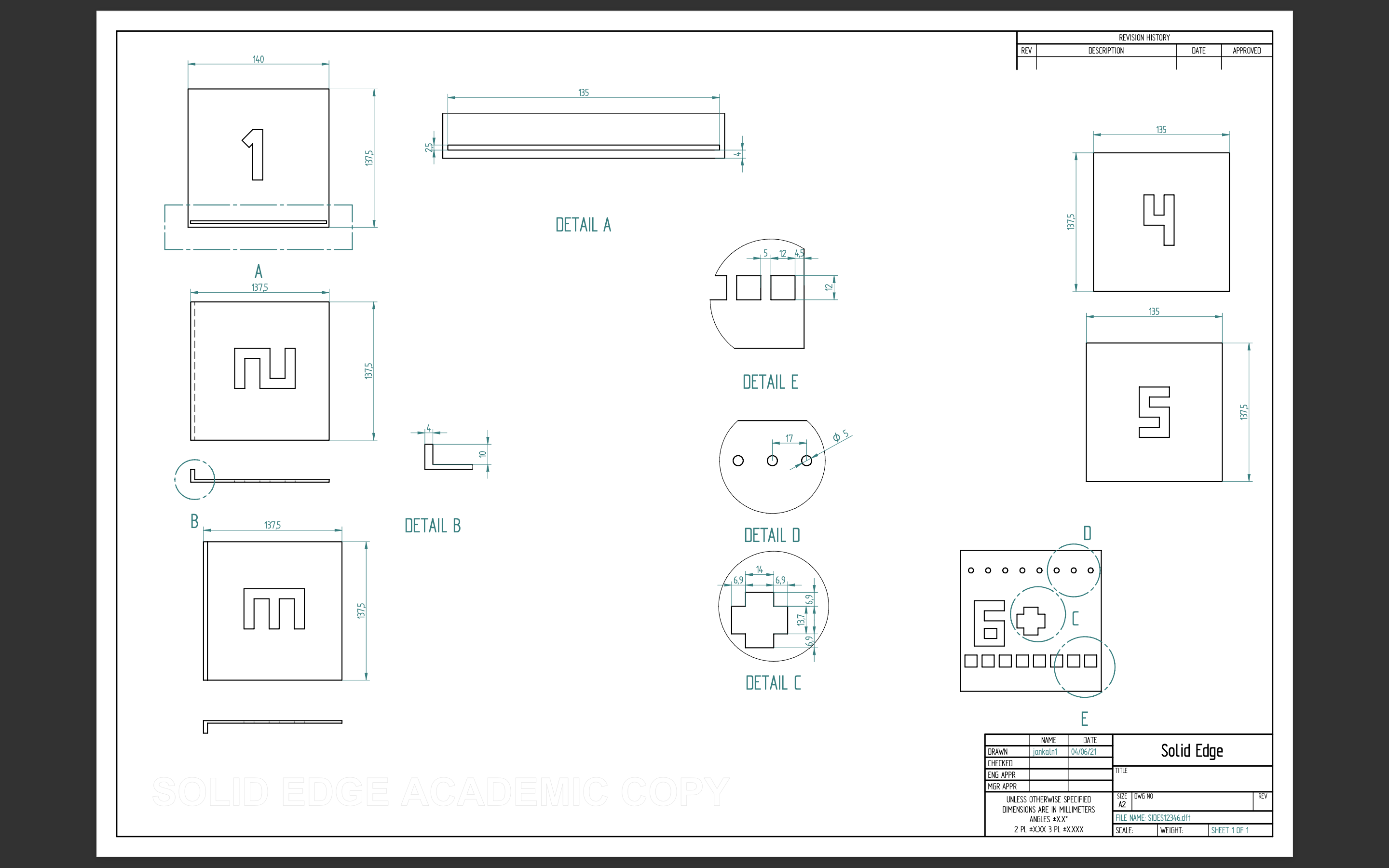 A Gitlab code repository has been created for the group to contribute towards the programming part of the project. Code for shift register is done and code for the ciphering algorithm in the second part of the puzzle is planned and written in python so far. AP and webserver functionality of Arduino works successfully. 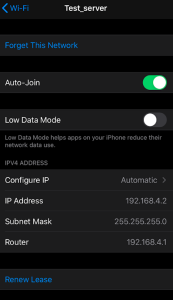 The cipher algorithm in the second puzzle of the project:

We started by planning what components we need and making the Tinkercad model. Then we started to acquire all the required components, so that we were able to plan the 3D-model and start programming the required codes separately for the Arduino, OLED-screen, IMU and the webserver. Next we got all the codes up and running and combined the different programming components in the repository into the main code. After a successful test of the together combined components we proceeded to soldering everything to a circuit board. Simultaneously we had the printer print our parts for the box. Lastly we assembled our box and electric components and made some finishing touches and test.