When using speech technology in realistic environments, such as at home, office or in a car, there will invariably be also other sounds present and not only the speech sounds of desired speaker. There will be the background hum of computers and air conditioning, cars honking, other speakers, and so on. Such sounds reduces the quality of the desired signal, making it more strenuous to listen, more difficult to understand or at the worst case, it might render the speech signal unintelligible. A common feature of these sounds is however that they are independent of and uncorrelated with the desired signal.

That is, we can usually assume that such noises are additive, such that the observed signal y is the sum of the desired signal x and interfering noises v, that is, y=x+v. To improve the quality of the observed signal, we would like to make an estimate

or conversely, we would like to minimize the distance

with some distance measure d(,.,). 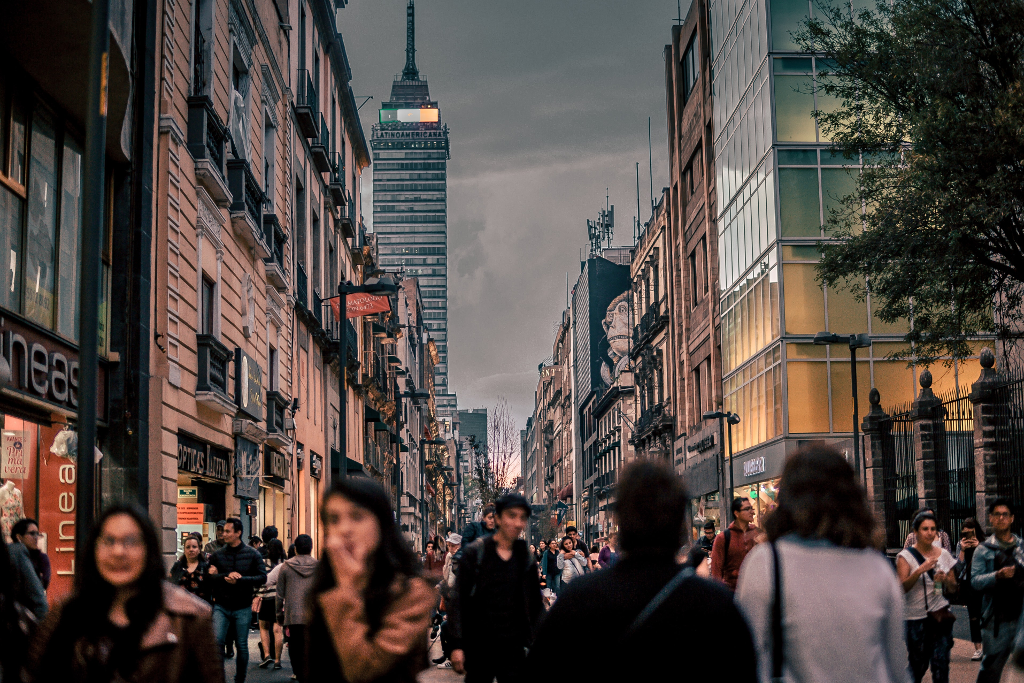 Photo by Jezael Melgoza on Unsplash

The STFT spectrum of a signal is a good domain for noise attenuation because we can reasonably safely assume that spectral components are uncorrelated with each other, such that we treat each component separately. In other words, in the spectrum, we can apply noise attenuation on every frequency bin with scalar operations, whereas if the components would be correlated, we would have to use vector and matrix operations. The benefit of scalar operations is that they are computationally simple, O(N), whereas matrix operations are typically at least O(N2).

Unfortunately, since our estimate of noise energy is not perfect and because we have hiddenly made an inaccurate assumption that x and v are uncorrelated, the above formula can give negative values for the energy estimate. Negative energy is not realizable and nobody likes pessimists, so we have to modify the formula to threshold at zero

Since STFT spectra are complex-valued, we then still have to find the complex angle of the signal estimate. If the noise energy is small

, then the complex angle of x is approximately equal to the angle of y,

, such that our final estimate is (when 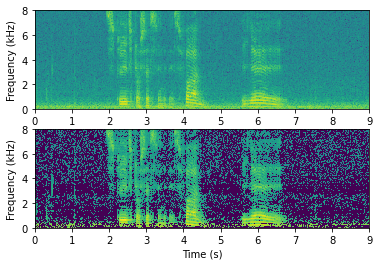 Observe that the form of the relationship above is

If we assume that target speech and noise are uncorrelated,

The minimum is found by setting the derivative to zero

such that the final solution is

and the Wiener estimate becomes

Observe that this estimate is almost equal to the above, but the square root is omitted. With different optimization criteria, we can easily derive further such estimates. Such estimates have different weaknesses and strengths and it is then a matter of application specific tuning to choose the best estimate.

Overall, it is however somewhat unsatisfactory that additive noise is attenuated with a multiplicative method. However, without a better model of source and noise characteristics, this is probably the best we can do. Still, spectral subtraction is a powerful method when taking into account how simple it is. With minimal assumptions we obtain a signal estimate which can give a clear improvement in quality. 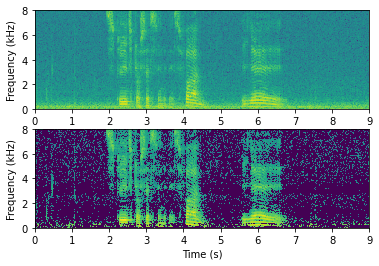 Above we considered the scalar case, or conversely, the case where we can treat components of a vector to be independent such that they can be equivalently treated as a collection of scalars. In some cases, however, we might be unable to find an uncorrelated representation of the signal or the corresponding whitening process could be unfeasibly complex. We then have to take into account the correlation between components.

Consider for example a desired signal

and their additive sum, the observation

Following the MMSE derivation above, we set the derivative of the error energy expectation to zero

Where the covariance matrices are

, and we used the fact that x and v are uncorrelated

. The solution is then clearly

where we for now assume that the inverse exists. This solution is clearly similar to the MMSE solution for the scalar case.

A central weakness of this approach is that it involves a matrix inversion, which is computationally complex operation, such that on-line application is challenging. It furthermore requires that the covariance matrix Ryy is invertible (positive definite), which places constraints on the methods for estimating such covariances.

In any case, Wiener filtering is a convenient method, because it provides an analytical expression for an optimal solution in noise attenuation. It consequently has very well documented properties and performance guarantees.

Our objective is to improve speech quality and we want enhance speech which is corrupted by noise. Speech however is typically highly varying in time and especially in a conversation, usually speakers do not speak at the same time. Thus often one speaker is silent about half the time. If there is no speech noise attenuation becomes trivial; Noise can be removed by zeroing the whole signal.

To take advantage of such non-speech periods, we can use voice activity detection (VAD) to determine which parts of the signal have speech and apply noise attenuation only there. Paraphrasing, we have:

This however requires that our voice activity detector is reliable also for noisy speech signals, which is difficult. An alternative is to estimate posteriori likelihoods as follows:

This method thus always tries to attenuate noise and then looks at the output whether "speech" or "non-speech" is more likely. Such hypothesis testing is often useful but assumes that we have access to effective likelihood estimators for both speech and noise.

Enhanced with (scalar) Wiener filtering and gated with VAD 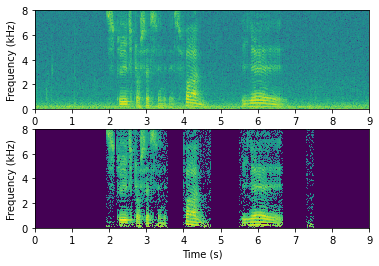 As seen above, we can attenuate noise if we have a good estimate of the noise energy. However, actually, both the spectral subtraction and Wiener filtering methods use models of the speech and noise energies. The models used above were rather heuristic; noise energy was assumed to be "known" and speech energy was defined as energy of observation minus noise energy. It is however not very difficult to make better models than that. Before going to improved models, note that we did not use speech and noise energies independently, but only their ratio. No clearly the ratio of speech and noise is the signal-to-noise ratio (SNR) of that particular component. We thus obtain an estimate of the SNR of the whole spectrum. Conversely, we would need only the SNR of the spectrum to attenuate noise with the above methods. The SNR as a function of frequency and time is often referred to as a mask and in the following we will discuss some methods for generating such masks. It is however important to understand that mask-based methods are operating on the power (or magnitude) spectrum and thus do not include any models of the complex phase. Indeed, efforts have in general focused mostly on the power spectrum and much less on the phase. On one hand, the motivation is that characteristics of the power spectrum are much more important to perception than the phase (though the phase is also important), but on the other hand, the power spectrum is also much easier to work with than the phase. Therefore there has been both much more demand and supply of methods which treat the power spectrum.

To model speech signals, we can begin by looking at spectral envelopes, the high-level structure of the power spectrum. It is well-known that the phonetic information of speech lies primarily in the shape of the spectral envelope, and the lowest-frequency peaks of the envelope identify the vowels uniquely. In other words, the distribution of spectral energy varies smoothly across the frequencies. This is something we can model and use to estimate the spectral mask. Similarly, we know that phonemes vary slowly over time, which means that the envelope varies slowly over time. Thus, again, we can model envelope behaviour over time to generate spectral masks.

A variation of such masks is known as binary masks, where we can set, for example, that the mask is 1 if speech energy is larger than noise energy, and 0 otherwise. Clearly this is equivalent with thresholding the SNR at unity (which is equivalent to 0 dB), such that an SNR-mask can always be converted to a binary mask, but the reverse is not possible. The benefit of binary masks is that it simplifies some computations.

If we then want to attenuate noise in a particular frame of speech it is then useful to use as much of the surrounding data (context) as possible. For best quality, we can model, say, a second of the speech signal both before and after the target frame. Though this can improve quality of the estimate, this has two clear negative consequences. First of all, including more data increases computational complexity. The level of acceptable complexity is though highly dependent on the application. Secondly, if we look into future frames to process the current frame, then we have to have access to such data. In a on-line system, this means that we have to wait for the whole look-ahead data to arrive before processing, such that the overall system has a delay corresponding to the length of the look-ahead. We can extrapolate the current frame from past frames, but interpolating between past and future frames does give much better quality. The amount of acceptable delay is also an application dependent question.

The first choice in designing machine learning methods for noise attenuation and other speech enhancement tasks is the overall systems architecture. The application is usually simply a neural network which takes noisy speech as input and outputs an estimate of the clean speech. A natural choice would then be to train the network with a large database of noisy speech samples and minimize the distance of the output to the clean speech signal. Since we assume that noise is additive, we can create synthetic samples by adding noise to speech. By varying the intensity (volume) of the noise samples, we can further choose the signal to noise ratio of the noise samples. With reasonable size databases of speech and noise, we thus get a practically infinite number of unique noisy samples such that we can make even a large neural network to converge.

A weakness of this model however is that even if the database is thus large, it has only a limited number of unique noises and unique speakers. There is no easy way of getting assurance that unseen noises and speakers would be enhanced effectively. What if we receive a noisy sample where a 3 year-old child talks with annoying vuvuzelas playing in the background. If our database contained only adult speakers and did not contain vuvuzela-sounds, then we cannot know whether our enhancement is effective on the noisy sample. 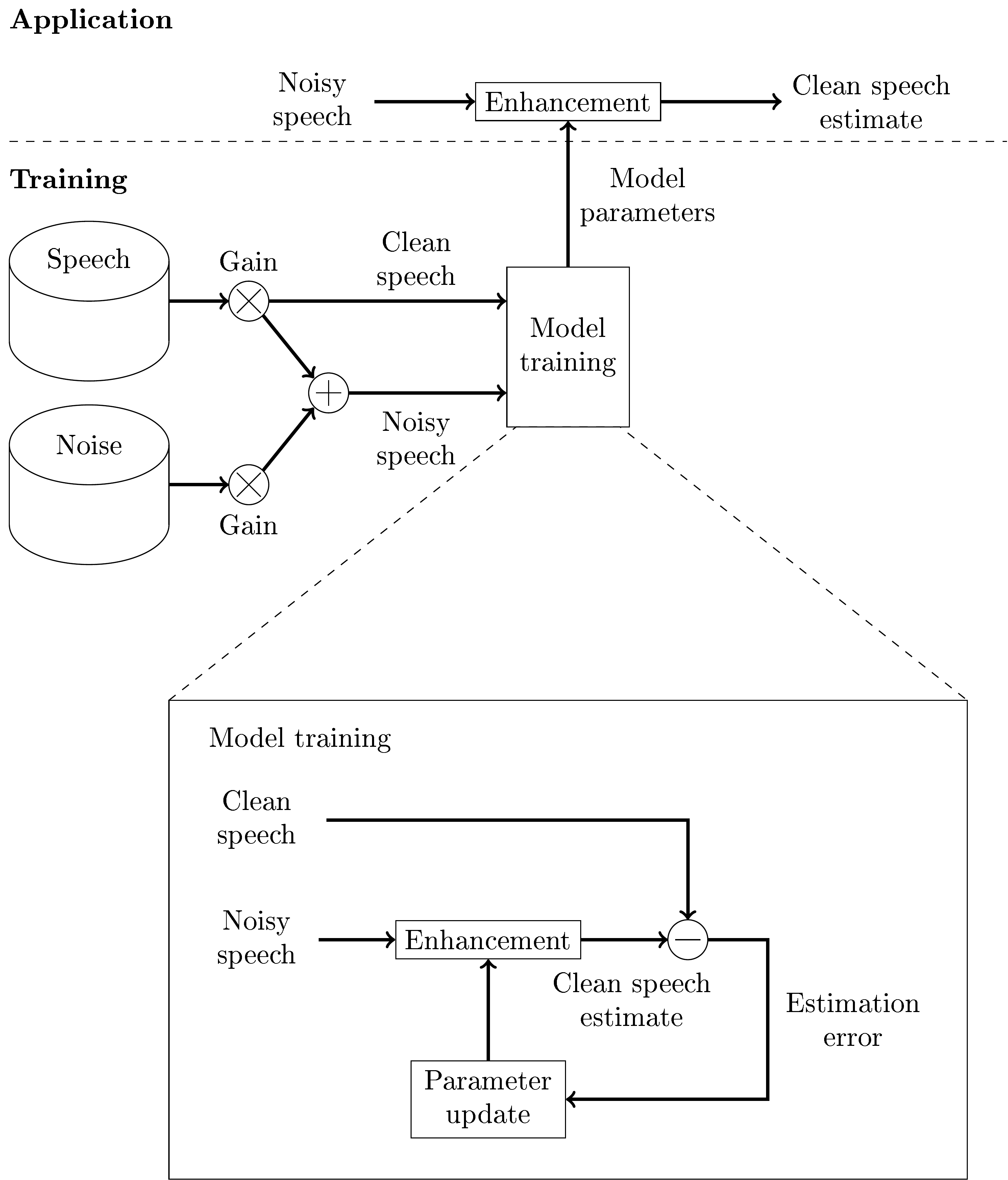 These two tasks are adversial in the sense that they work against each other. In practical application we would use only the enhancement network, so the generative network is used only in training.

Application and training with a generative adversarial network (GAN) structure for speech enhancement. 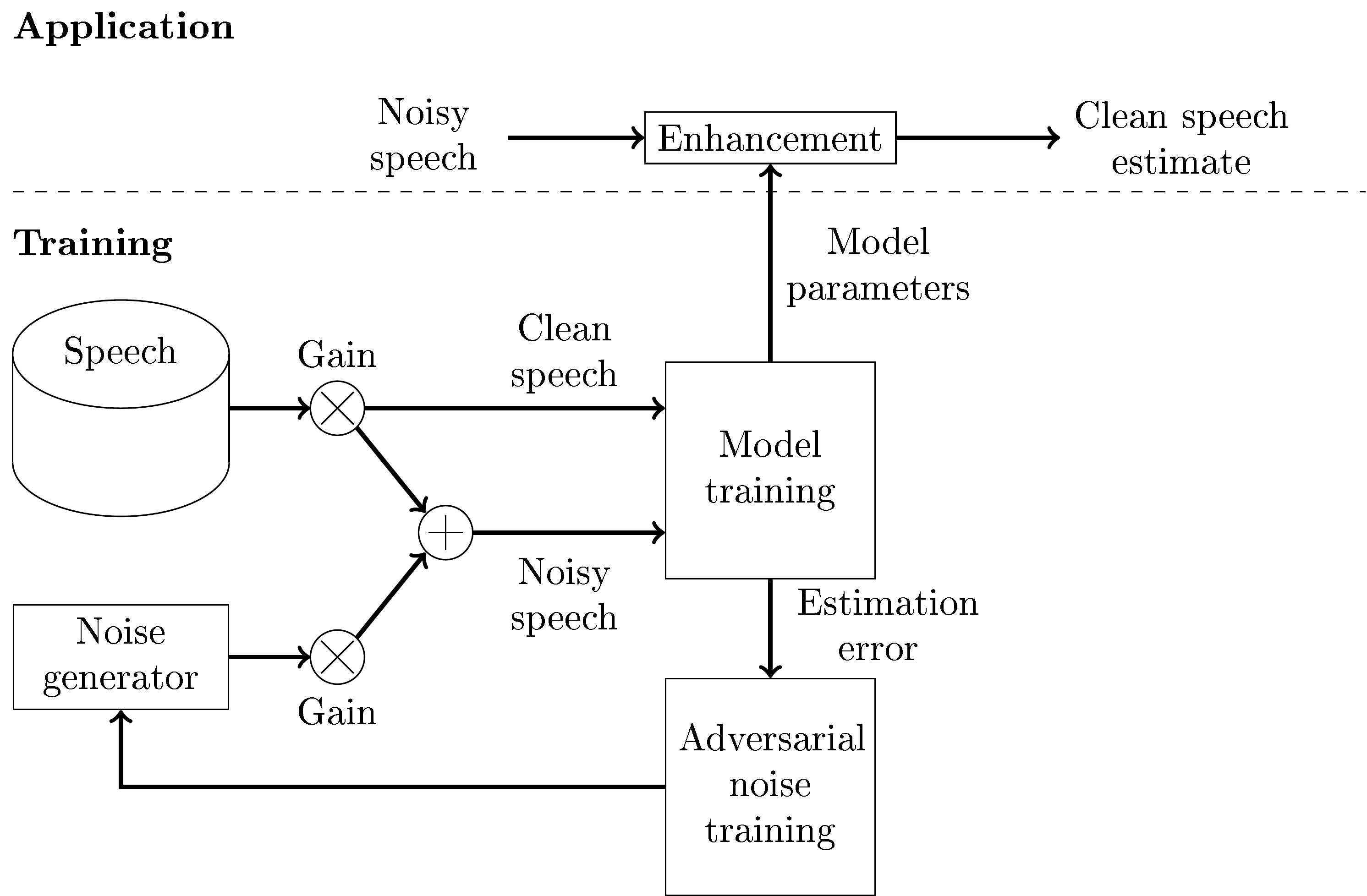