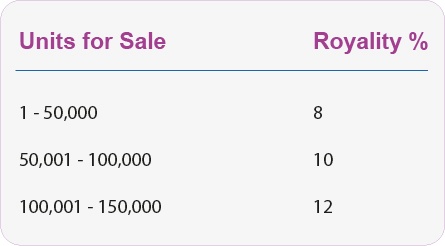 Usually royalties are determined in the contract as a proportion of the phonogram's wholesale price, or Published Price to Dealer (PPD), excluding value-added tax [2]. Thus, if the phonogram's PPD is, for example, 12 Euros and the royalties 8%, the artist receives 0.96 Euros for each sold phonogram. In a band of four, this will still be divided by four, leaving each musician with 0.24 Euros per sold phonogram.

The payment of royalties can be made subject to reaching the so-called break even limit. This type of a condition transfers some of the record company's cost risk to the artist, royalties are paid only after the company has been able to cover some of the costs with income from the phonogram's sales. In addition, the contract can contain many other deductions from the royalties. [3]

The duration of a traditional recording contract varies. It is customary, that company undertakes to publish one album-length phonogram, and holds an option that covers, e.g., the next two phonograms.