Project Management is the business process of creating a unique product, service or result. A project is a finite endeavor having specific start and completion dates undertaken to create a quantifiable deliverable. This finite characteristic of projects stands in sharp contrast to processes, or operations, which are permanent or semi-permanent functional work to repetitively produce the same product or service. In practice, the management of these two systems is often found to be quite different, and as such requires the development of distinct technical skills and the adoption of separate management philosophy.

The primary challenge of project management is to achieve all of the goals of the project charter while adhering to three out of the four classic project constraints some time referred to as the "triple constraints" The four constraints are defined as scope, time, cost and quality.

Like any human undertaking, projects need to be performed and delivered under certain constraints. Traditionally, these constraints have been listed as "scope," "time," and "cost".  These are also referred to as the "Project Management Triangle," where each side represents a constraint. One side of the triangle cannot be changed without affecting the others. A further refinement of the constraints separates product "quality" or "performance" from scope, and turns quality into a fourth constraint.

An approximation of a project cost depends on several variables including: resources, work packages such as labor rates and mitigating or controlling influencing factors that create cost variances. But the economic cost that must be considered includes worker skill and productivity which is calculated using various project cost estimate tools. This is important when companies hire temporary or contract employees or outsource work. Frequently project manager use project management cost software to calculate the cost variances on a project.

The overall definition of what the project is supposed to accomplish, and a specific description of what the end result should be.  A major component of scope is the quality of the final product, determined by the amount of time put into individual tasks. Some tasks may require a given amount of time to complete adequately, but given more time could be completed exceptionally. Over the course of a large project, quality can have a significant impact on time and cost (or vice versa).

Project objectives define target status at the end of the project, reaching of which is considered necessary for the achievement of planned benefits. They can be formulated as S.M.A.R.T.E.R

-         Realistic (given the current state of organizational resources) and

Project Management tries to gain control over variables such as risk:

A risk is a potential point of failure: Most negative risks (or potential failures) can be overcome or resolved, given enough planning capabilities, time, and resources.

Customers (either internal or external project sponsors) and external organizations (such as government agencies and regulators) can dictate the extent of three variables: time, cost, and scope. The remaining variable (risk) is managed by the project team, ideally based on solid estimation and response planning techniques. Through a negotiation process among project stakeholders, an agreement defines the final objectives, in terms of time, cost, scope, and risk, usually in the form of a charter or contract.

To properly control these variables a good project manager has a depth of knowledge and experience in these four areas (time, cost, scope, and risk), and in six other areas as well: integration, communication, human resources, quality assurance, schedule development, and procurement.

There are many tools used in Project management. The most used are in the following list. Pert charts and Gantt charts are very specific of the project managment, they are described more precisy in the next paragraph.

-         PERT charts: method to analyze the involved tasks in completing a given project

-         Event Chain Diagrams: visualizations that show the relationships between events and tasks and how the events affect each other

-         RACI diagram: used to describe the roles and responsibilities of various teams or people in delivering a project or operating a process

PERT is a method to analyze the involved tasks in completing a given project, especially the time needed to complete each task, and identifying the minimum time needed to complete the total project.
The most recognizable feature of PERT is the "PERT Networks", a chart of interconnecting timelines. PERT is intended for very large-scale, one-time, complex, non-routine projects. 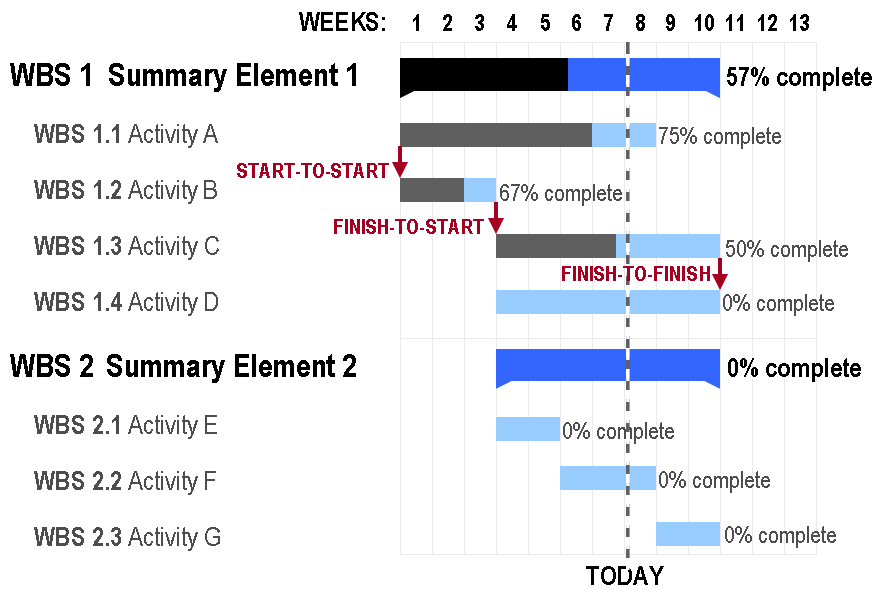 Advantages and limitations
Gantt charts have become a common technique for representing the phases and activities of a project work breakdown structure (WBS), so they can be understood by a wide audience.
A common error made by those who equate Gantt chart design with project design is that they attempt to define the project work breakdown structure at the same time that they define schedule activities. This practice makes it very difficult to follow the 100% Rule. Instead the WBS should be fully defined to follow the 100% Rule, then the project schedule can be designed.
Although a Gantt chart is easily comprehended for small projects that fit on a single sheet or screen, they can become quite unwieldy for projects with more than about 30 activities. Larger Gantt charts may not be suitable for most computer displays. A related criticism is that Gantt charts communicate relatively little information per unit area of display. That is, projects are often considerably more complex than can be communicated effectively with a Gantt chart.
Gantt charts only represent a part of the triple constraints of projects, because they focus primarily on schedule management. Moreover, Gantt charts do not represent the size of a project or the relative size of work elements, therefore the magnitude of a behind-schedule condition is easily miscommunicated. If two projects are the same number of days behind schedule, the larger project has a larger impact on resource utilization, yet the Gantt does not represent this difference.