Sartre Project is a EU funded project which aims to "encourage a step change in personal transport usage by developing of environmental roadtrains called platoons." These platoons are basically traffic queues where one car operates as a lead car and others can join the queue and thereby drive to the desired destination without the need for the driver to actually drive the car. This project aims to re-produce this functionality in miniature-scale.

We evaluated a few different approaches on how the turning and the speed control could be implemented. The options evaluated were:

Both front car and follower car were working RC-cars so we just had to do some small improvements and changes to get them working for our purpose.

Infra red sensors are capable of measuring the distance from 20 to 150 cm. There is a "blank spot" in the beginning of the measuring area that is caused by the way the distance is transformed to voltages. Typical sensor transformation graph is shown in the picture below. From the picture one can notice that the low distances (0...20cm) have the same values as the real (usable) measurements from the linear part of the graph. 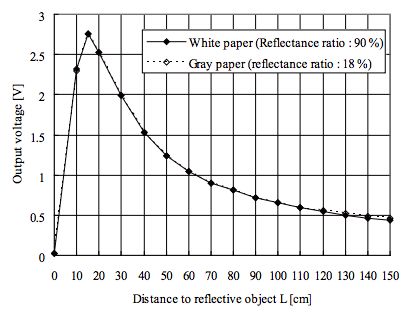 The programming was done with arduino enviroment. The control is based on arduino built-in libraries.

Steering is made possible by determining the distance difference (ΔL) of the reflection sheet of the front car when it is turning. The distance to the front car is measured with two IR-sensor on both sides of the follower car. By calculating the distance difference between left and right side IR-sensors readings the adequate steering command is calculated. The measurements of the sensors are read on every cycle of the program and an average of last two measurements is calculated to smooth the tuning command on the steering servo. 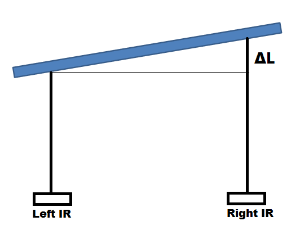 The follower car uses a standard, automatically calibrated ESC (electronic speed controller) which needs for the calibration receive a neutral signal first and then signal for going forward. The automatic calibration caused us some problems as we didn't notice this calibration method in the beginning of the project; values set for the speed control changed during the testing as the ESC battery was taken out.

In order to operate the car:

As the calibration is finished, the follower car follows the object in front of it.

To improve next time: