The aim of this project is building a magneto-rheological device to demonstrate how changing the electricity current affects the damping force. Manufacturing an MR valve and use it as a controllable component is necessary to achieve this goal. 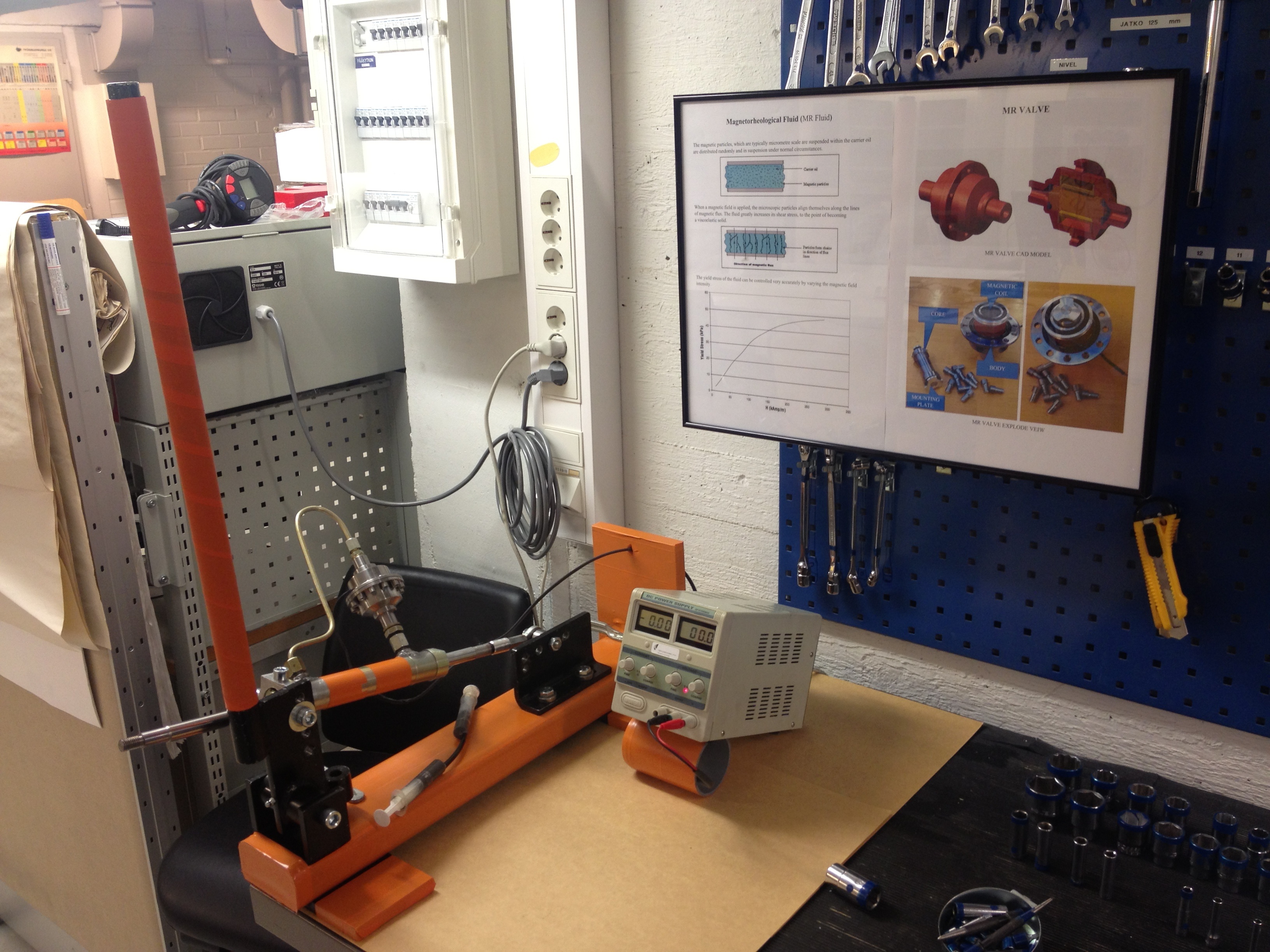 MR Fluid is a fluid with high density of magnetic particles, which are typically micrometer scale and suspended within the carrier oil. The particles are distributed randomly and in suspension under normal circumstances. Following figure illustrate MR fluid.

When a magnetic field is applied, the microscopic particles align themselves along the lines of magnetic flux. The fluid greatly increases its shear stress, to the point of becoming a viscoelastic solid. The yield stress of the fluid can be controlled very accurately by varying the magnetic field intensity.

MRF-132DG from LORD Company has been used in this project. In the following curve fluid's yield stress versus magnetic field strength has been shown. 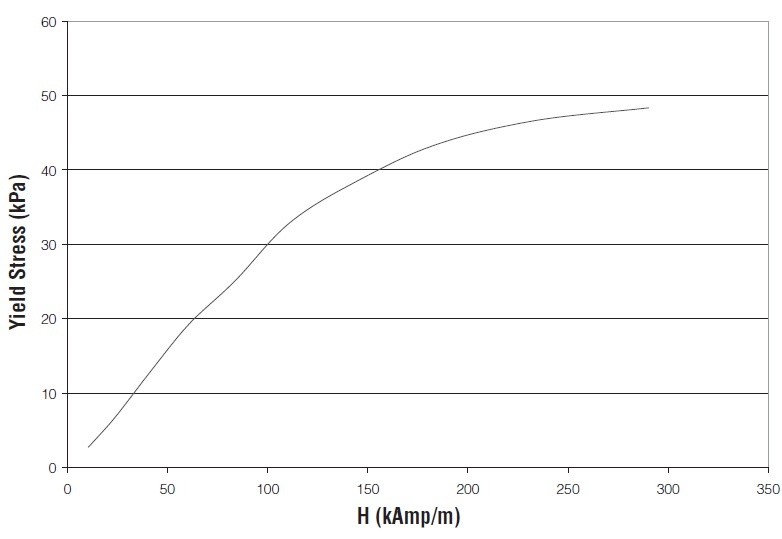 A magnetorheological valve is a valve filled with magnetorheological fluid, which is controlled by a magnetic field, usually using an electromagnet. This allows the damping characteristics of the system to be continuously controlled by varying the power of the electromagnet. This type of shock absorber has several applications, most notably in semi-active vehicle suspensions which may adapt to road conditions, as they are monitored through sensors in the vehicles.

Manufactured parts have been shown in following figures. 3 O-rings have been used to prevent fluid leakage. outer bolts prepare comparison force to squeeze them. 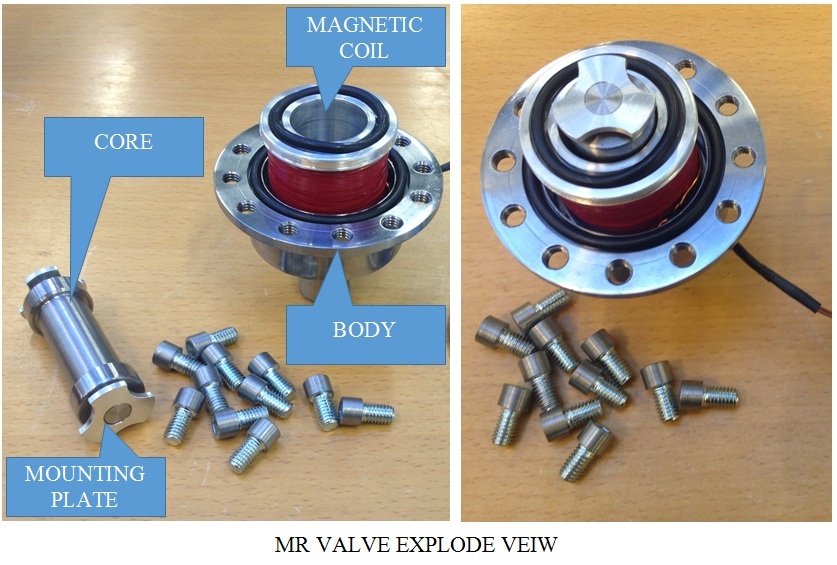 Magnetic field FEM analysis result shows that magnetic flux is significant at fluid gaps. So, this is an acceptable design which is worth to be manufactured.

In the double acting cylinders, the pressure from the fluid is applied in both the directions. 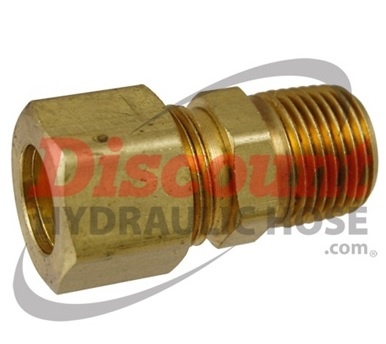 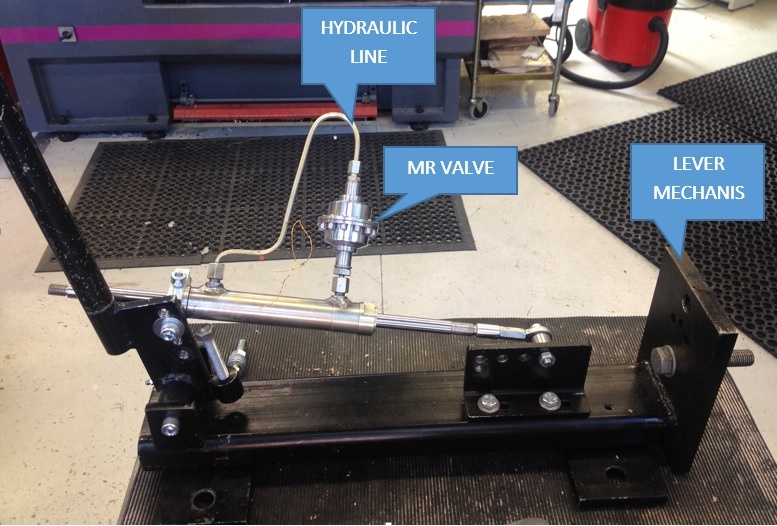 Magnet wire is a copper or aluminum wire coated with a very thin layer of insulation. It is used in the construction of transformers, inductors, motors, speakers, hard disk head actuators, potentiometers, electromagnets, and other applications which require tight coils of wire.

A power supply with adjustable current and voltage is necessary to run the system. 0 to 5 voltage and 0 to 5 current is the suitable range of voltage and current.

The effect of magnetic field was obvious on lever moving force which represents damping force in a vibrational system. But I am pretty sure by optimizing the affecting parameters damping force can increase dramatically. Some suggestion for future work has been presented below.