Speaker diarization is the process of segmenting and clustering a speech recording into homogeneous regions and answers the question “who spoke when” without any prior knowledge about the speakers. A typical diarization system performs three basic tasks. Firstly, it discriminates speech segments from the non-speech ones. Secondly, it detects speaker change points to segment the audio data. Finally, it groups these segmented regions into speaker homogeneous clusters.

An overview of a speaker diarization system.

Although there are many different approaches to perform speaker diarization, most of them follow the following scheme:

Speaker segmentation: It partitions the audio data into acoustically homogeneous segments according to speaker identities. It detects all boundary locations within each speech region that corresponds to speaker change points which are subsequently used for speaker clustering.

Two items need to be defined in both bottom-up and top-down clustering:

1. A distance between speech segments to determine acoustic similarity. The distance metric is used to decide whether or not two clusters must be merged (bottom-up clustering) or split (top-down clustering).

2. A stopping criterion to determine when the optimal number of clusters (speakers) is reached.

Bottom-up (Agglomerative): It starts from a large number of speech segments and merges the closest speech segments iteratively until a stopping criterion is met. This technique is the most widely used in speaker diarization since it is directly applied on the output of speech segments from speaker segmentation. A matrix of distances between every possible pair of clusters is computed and the pair with highest BIC value is merged. Then, the merged clusters are removed from the distance matrix. Finally, the distance matrix table is updated using the distances between the new merged cluster and all remaining clusters. This process is done iteratively until the stopping criterion is met or all pairs have a BIC value less than zero .

Top-down: Top-down Hierarchical Clustering methods start from a small number of clusters, usually a single cluster that contains several speech segments, and the initial clusters are split iteratively until a stopping criterion is met. It is not as widely used as the bottom-up clustering. 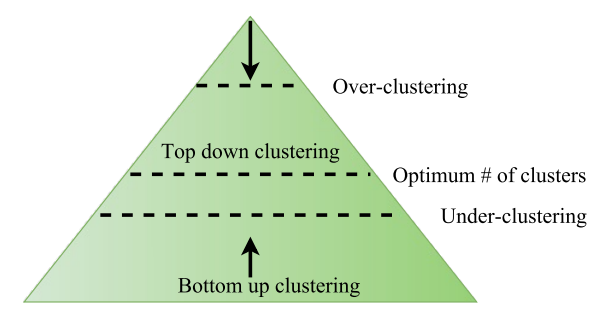 Bottom-Up and Top-down approaches to clustering

This section describes some of the state-of-the-art speaker diarization systems.

HMM/GMM based speaker diarization system: Each speaker is represented by a state of an HMM and the state emission probabilities are modeled using GMMs. The initial clustering is performed initially by partitioning the audio signal equally which generates a set of segments { \( s_i \) }. Let  \( c_i \) represent  \( i^{th} \) speaker cluster,  \( b_i \) represent the emission probability of cluster  \( c_i \) and  \( f_t \) denote a given feature vector at time \( t \) . Then, the log-likelihood  \( logb_i(s_t) \) of the feature ft for cluster  \( c_i \) is calculated as follows:

The agglomerative hierarchical clustering starts by overestimating the number of clusters. At each iteration, the clusters that are most similar are merged based on the BIC distance. The distance measure is based on modified delta Bayesian information criterion [Ajmera and Wooters, 2003]. The modified BIC distance does not take into account the penalty term that corresponds to the number of free parameters of a multivariate Gaussian distribution and is expressed as:

distance among these clusters is less than threshold value 0, the speaker diarization system stops and outputs the hypothesis.

Deep learning approaches: Speaker diarization is crucial for many speech technologies in the presence of multiple speakers, but most of the current methods that employ i-vector clustering for short segments of speech are potentially too cumbersome and costly for the front-end role. Thus, it has been proposed by Daniel Povey an alternative approach for learning representations via deep neural networks to remove the i-vector extraction process from the pipeline entirely. The proposed architecture simultaneously learns a fixed-dimensional embedding for acoustic segments of variable length and a scoring function for measuring the likelihood that the segments originated from the same or different speakers.  The proposed neural based system matches or exceeds the performance of state-of-the-art baselines.

Diarization Error Rate (DER) is the metric used to measure the performance of speaker diarization systems. It is measured as the fraction of time that is not attributed correctly to a speaker or non-speech.

The DER is composed of the following three errors:

Speaker Error: It is the percentage of scored time that a speaker ID is assigned to the wrong speaker. Speaker error is mainly a diarization system error (i.e., it is not related to speech/non-speech detection.) It also does not take into account the overlap speeches not detected.