For a brief summary on the value of Social Software, see "Social Networking in Plain English" (1:48min) on YouTube. 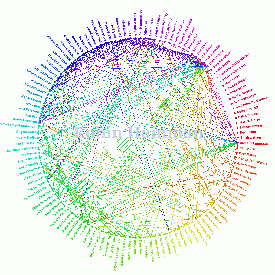 The values of these companies have been in the news constantly as rumors about potential acquisitions have surfaced. For example a Wikipedia article (2008-07-07) on Facebook reports the following:

Microsoft approached Facebook in September 2007, proposing an investment in return for a 5% stake in the company. Microsoft would pay an estimated $300-500 million for the share. Microsoft announced on October 24, 2007 that it purchased a 1.6% share of Facebook for $246 million.

BusinessWeek reported on March 28, 2006 that a potential acquisition of the website was under negotiation. Facebook reportedly declined an offer of $750 million from an unknown bidder, and it was rumored the asking price rose as high as $2 billion.

Social networking seems to be the hot term today. Even hard-core companies have begun to realize that linking people with one another more efficiently, both inside and outside the organization might be a good thing, not just a waste of time. Sites like LinkedIn are gaining increasing momentum as more and more people and companies use the site to connect to colleagues, partners, job seekers, employers etc. According to Wikipedia:

LinkedIn is a business-oriented social networking site founded in December 2002 and launched in May 2003 mainly used for professional networking. As of December 2007, its site traffic was 3.2 million visitors per month, up 485% from the end of 2006. As of May 2008, it had more than 24 million registered users, spanning 150 industries.

The purpose of the site is to allow registered users to maintain a list of contact details of people they know and trust in business. The people in the list are called Connections. Users can invite anyone (whether a site user or not) to become a connection. This list of connections can then be used in a number of ways:

Collaboration, cooperation, sharing, knowledge-creation, communication, personalization. Really? At least Harvard Business School professor, Andrew McAfee, believes firmly in  the power of social networking software (SNS), when it comes to connecting people in a way that creates value for business. I urge you to read his extremely educational blog post on the subject. I mean it, read the post.

It seems that not only academics have found a fascination for SNS. A company called Serena Software has gone as far as to actually replace its existing intranet with Facebook as the front-end, linked to a low-cost content management system (CMS) behind the firewall. The management of Serena felt that their existing intranet was a poor platform for document finding and sharing. In addition, one of the major flaws of traditional intranets, even when they work to find stuff, is the lack of social context. It is difficult to find anything about people. Serena wanted to promote a greater connection between people. They felt that Facebook, being both free and a great example of web 2.0, seemed to be the right answer. They established a private Facebook group for Serena employees and they built a few simple custom application to better enable intranet functions. Now they provide links through Facebook to documents stored securely behind the firewall. This enables people to also learn about the people providing the information, creating a truly social environment. Serena also has public Facebook groups to connect with customers and the broader marketplace. Read more in the company press release.

This is not to say that all companies and organizations should automatically switch to Facebook intranets, just a reminder to be open to new thoughts and possibilities. Many people have criticized Serena's decisions, referring to the major security issues related to the choices. However, Facebook has now opened up its platform and data to outside developers and as a result, applications built specifically for enterprise use have started to emerge. A great and promising example is Worklight, who sells a server + software combination that sits behind the firewall, takes data from all manner of enterprise appliacations (ERP, CRM, HR, etc.) and serves that data out "Web 2.0-style" to those who are authorized to see it (according to the company's existing policies). Web 2.0-style here means via RSS, Ajax, widgets, mashups, IM, etc. And now Facebook. See a more detailed description of the application at Worklight's homepage or a commentary and estimation of the application by McAfee in his blog post.

To sum up what Web 2.0 social software tools are essentially about in the business world, a quote from an interview with Jeremy Burton, CEO Serena Software (Fortune Magazine, retrieved 2008-07-07):

After detailing all the ways he is convinced that Facebook is helping him change Serena's culture and make the company more modern and efficient, Burton contentedly ends our conversation by saying "...and it's free!

In addition to being free, there also has to be something else to SNS... It must also be a lot of fun to attract so many people willing to spend so much time building up their profiles, adding pictures, and writing messages to each other. At least I wouldn't give up my Facebook account without a fight!