How to use A+, how to create a course, where do I find instructions, and the questions I have on A+

Quick start guide explains how to start A+ course development with the Aplus-manual course. You can run the course in your computer with the A+ Docker containers.

The Aplus-manual can be used for testing A+ features. There is also a separate test-course that focuses on using all A+ features with many different settings so that it is easier to manually start testing them. The test-course can of course be expanded with new A+ features (and many features are still missing there). You can can create pull requests for the test-course too!

The A+ architecture is briefly explained in these pages:

You don't need to clone or fork all of them. Do that when you need to. Many repositories are listed here, so you can find them when needed.

Docker Compose ("docker-compose") is another tool besides Docker ("docker"). CS IT should have installed Docker into Aalto work laptops for you (i.e. there should be a package "docker-ce" and a command "docker"). Unfortunately, Ubuntu repositories have outdated versions of docker-compose, so it should be installed manually. It can be installed into the user's home directory without administration privileges. Docker-compose is just a single binary executable file.

NOTE: this is not needed on macOS as docker-compose is included in the Docker for Mac application.

Installation can be completed by copy-pasting and executing following in a terminal window. If the last lines are ok, then do logout from the desktop and log back in to make the command work without full path.

Run this in terminal to install docker-compose

Following example shows what it should look like. Note that the script is pasted one block at a time and only last part provides any feedback. Furthermore, if the version number is the same, then the hash on the last line should be the same for you too. However, if you get a newer version, then it will be different.

Everything should work now, but if you are unsure, you can compare your local files to these examples:

This configuration is not required for your environment to work for A+ development, but it might still be useful.

Sometimes crashed and failed commands go unnoticed. To help with that, you can include program exit codes in the prompt. If you drop this ..zshrc into your home folder, then your shell will start to look like the following image. 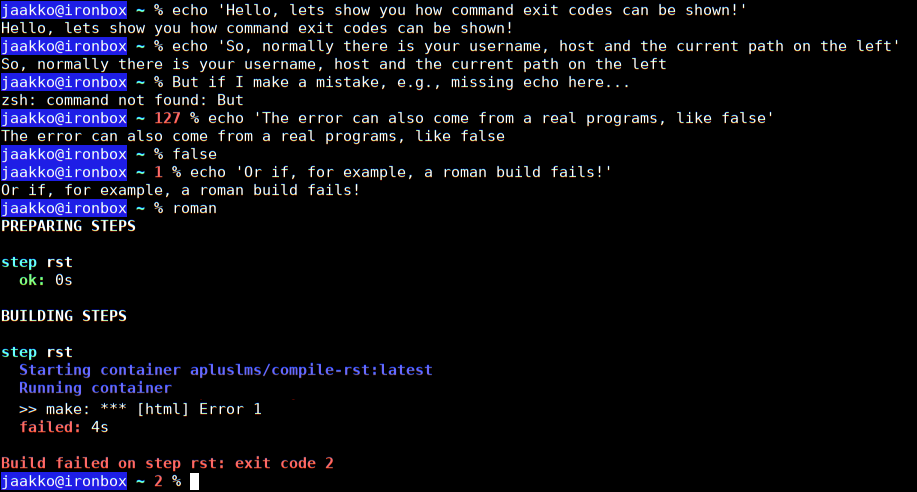 After downloading the that file, move it to your home folder, and then rename it from home.zshrc to .zshrc (yes, it starts with a dot).

Use nano (i.e. not vim) for git commits with nice colors (OPTIONAL)

In this part, we configure our terminal text editor to nano. which might be easier to use than the typical default vim. In addition, we add custom syntax coloring to git operations.

Run this in terminal to set VISUAL and EDITOR to nano

Now, your ~/.profile should look something like the example file in the seciton Installing Docker Compose. You need to log out and in for above changes to take effect.

Second, let's configure nano to show some colors and to react to mouse clicks. To do that, create following files:

If you need to copy text from open nano session, then you need to press SHIFT while selecting text with the mouse. You could also disable mouse by commenting out the corresponding line. Or you can add line numbers. Both parameters have comments in the file above.

For the second file, you might need to create the folder ~/.nano.

Now, when you issue a command, which uses editor (e.g. git commit), you should see nano with some nice colors.

Python virtual environments allow you to install Python packages (libraries and tools) without interfering with the system-wide Python installation. Each virtual environment is isolated from each other, so you can, for example, install different versions of the same package in different environments. You typically create a new venv for each app that requires a lot of dependencies, for example, a venv for a-plus and a venv for the mooc-grader, assuming you develop both systems. We recommend that the venv directory is created outside the application directory, e.g., outside the a-plus source code directory.

Since we can run A+ and the MOOC-Grader in Docker containers, we typically only need virtual environments for running certain Django (manage.py) commands like "test", "makemigrations", "makemessages", and "compilemessages".

The example below creates a new venv in the directory venv_aplus under the current working directory.

The source command is used to activate the venv again at another time (in a new terminal window or after rebooting the machine): source venv_aplus/bin/activate

Course developers usually do not modify A+ source code and they do not need to clone the a-plus git repo. They can run the latest released versions of the A+ Docker containers in order to test their courses. The container version is set in docker-compose.yml.

https://github.com/apluslms/develop-aplus is a utility repo for debugging A+ and mooc-grader using VSCode in a docker container. The src/srv part below applies to it too, it is set to /srv/ in the repo.

This only tells you how to start the debugger. For how to actually use it, see https://code.visualstudio.com/docs/editor/debugging.

Now you should see the the newly added launch configuration in the list of debugable things (top of the Run and Debug tab). Starting it once the program in the docker container is running should attach the debugger to it.

This is NOT a tutorial. If you are unfamiliar with git or unsure of what you are doing, read some tutorials and/or ask for help. If you are not sure what a command does, read the documentation.

Creating a branch, making commits and pushing them to a remote fork

git status
git add <file> # do this for all wanted files, if want just part of a file, use -p
# if you want to add all tracked files, use -u

If ready for a pull request, you can create it in GitHub

# start with cleaning the branch history if applicable (no PR yet, but there are fixups or things to squash)

Adding a new commit to a PR

If a fixup:
git commit --fixup=<commit>

git checkout <branch to clean up>
git rebase -i <commit or tag or branch that is before the things you want to clean>
# if you have fixup-commits, you can also use:
# git rebase -i --autosquash <commit>

# reorder commits to wished order, mark commits that should be squashed to the previous ones with f or s appropriately, etc.
# In Nano, CTRL+K (cuts the line you are currently on) and CTRL+U (pastes the line) may be very useful for reordering the commits

# if the pull request is done and approved, then we can force push the cleaned branch
git push -f <your remote fork> <branch>

VSCode allows partial staging. That is, it allows you to stage (add to the next commit) specific lines:

You can also use this to revert a change by choosing "Revert Selected Ranges".

Similar process can be used to unstage changes from the files under "Staged Changes" in the Source Control tab.

Manual testing is always required as well even if you had a lot of automated tests. Mount your source code into the A+ and MOOC-Grader Docker containers and run them in a test course. Think of what can be tested automatically and what should be tested manually.

Selenium tests run a browser such as Firefox and execute interactions in the web page according to the test code. They test if the page behaves correctly. Selenium tests are a form of functional testing that tests the system from the end users perspective instead of testing internal functions of the system like unit testing does.

Type hints must be added to the following things:

UPDATE 26.6.2020 based on discussion (TODO: clean up the pull request and issue guide)

Goal of the process is to ensure, there wouldn't be huge problems at the PR time, but that still can happen. Sometimes it might happen that we need to move back to the issue, discuss it with the new information in mind, and choose what should be done if anything. With a clear idea about the problem, use case and an implementation idea, that should happen too often though.
In short, the development, implementation or the review can find information, which was not available during the discussion about the issue. If that happens, I think a good idea would be commenting in the issue "The code/thing/idea (link to code if relevant) made me think that have we have not consider thing Y" or such. This can mean: PR is closed (if it's way of the new plan), PR is redirected, PR is accepted, but it doesn't close the issue and another PR is created to continue. Keep in mind that new issues should be created if that is more suitable.
(Interestingly, original paper about waterfall development model described a process, where you can return to previous steps if that is need